My daughter never was interested in movies or TV until she started daycare where, once in a while, they could watch a movie. Suddenly, a whole new world of fairytales, pirates and princesses opened up to her. Soon I noticed she was playing games inspired by the movie she had been watching. I have to admit that I both loved and hated her new love for movies.

I loved that we could cuddle up together and watch a movie sometimes, but I also hated the idea of her sitting glued to the TV. When her brother came along, we established a movie night, which now is Friday, and we’re very selective about what they can watch.

These days, kids are exposed to so much media via TV, IPad, computer, even phones. My daughter is now 7 years old, and I’m so

surprised at how many of her friends have personal IPhones and IPads. Sure, we have an IPad, IPhones, computers, too. But the kids don’t need to have their own; they will watch movies or play games on them only when we’re traveling.

I really believe it’s so important to limit screen time. Most children in American spend 40 hours a week in front of screens. It’s sad but true that children in the U.S. spend more time with electronic media than participating in any other activity, aside from sleep. The American Association of Pediatrics recommends a maximum of 1-2 hours of screen time for kids over the age of 2, and none at all for younger kids. Children under the age of 2 are at a critical time of brain development. Spending so much screen time may hinder the development that should come from playing and interacting with both adults and other kids. For older kids, too much screen time interferes with their being physically active, playing, reading and also learning. Research has shown that kids who spend too much time watching TV, playing video games and sitting in front of the computer are more likely to be overweight or obese.

My husband and I have limited screen time to only two days a week, and zero computer and IPad time. We don’t allow kids to eat in front of the TV, and we dream about a day when we won’t have a TV at all.

Why Organic Foods Matter to Kids 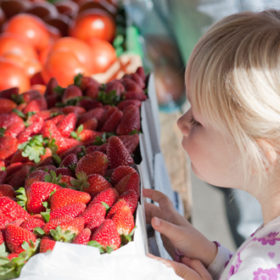