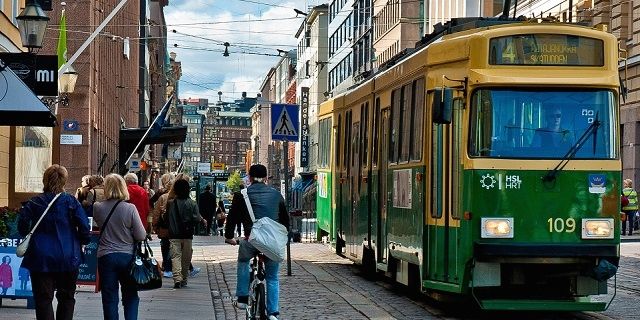 A car-free city sounds too good to be true, right? An urban environment so easy to maneuver your way around that having a personal car becomes meaningless is the dream of many an environmentalist. It may become a reality for one European city:

Helsinki. The capital of Finland has set this lofty goal for itself to achieve within the next ten years. Although they already have a substantial public transportation system and bikes are incredibly common, the country is aiming for a holistic system referred to as “mobility on demand,” which, using a smartphone app, will coordinate the collective travelers to their destinations.

The proposed plan includes minibuses, shared bikes, ferries, and even considers driverless cars! Reportedly, a user would choose their pickup and drop off point on the app, which then would use an algorithm to coordinate with other travelers in the city. The entire plan is being developed by a graduate engineering student hired by the city of Helsinki.

Despite being complex and ambitious, the city seems to be realistic in its goals. While not removing cars outright, the plan may make a private car unnecessary and more of a hassle than it’s worth. There are obvious issues surrounding the full integration of the program, beginning with the necessity of having and being able to operate a smartphone. Another problem that may arise is the higher cost of the program and its affordability for all citizens. And, going car free is not feasible for the country as a whole: part of Helsinki’s likely success is that it is so densely populated.

The benefits for the environment may be the most desirable aspect for some people, but there are other, more immediate benefits as well — namely, higher safety for cyclists and less congestion for the cars that are still in use.

As the first program of its kind, Helsinki’s ambitions are sure to be watched by other forward thinking cities for the next few years.

Eco-Couture: On Trend in Clothing and the Environment