The Raw on Raw Milk

“Raw milk” is simply milk that has not been pasteurized, homogenized, irradiated, or frozen; neither has it been treated with additives, chemicals, or UV light. Raw milk is natural, untouched milk straight from cows, goats, or sheep, and in some countries, camels or buffalo. Pasteurization heats milk to 161 degrees Fahrenheit to kill microbes, but it also kills beneficial probiotics, proteins, and enzymes. Raw milk is never heated above the animal’s highest body temperature, which is usually 101-105 degrees Fahrenheit. Typical grocery store milk is so highly processed that it turns blue. Large amounts of dolomite (a rock – mined calcium carbonate) are added to make it more white, and irradiated hydrogenated vegetable oil is added as “Vitamin D.”

Prior to the Industrial Revolution and the invention of pasteurization in 1864, everyone drank raw milk exclusively. During the Industrial Revolution, large portions of the population moved into cities, becoming removed from agriculture. Food products had to be shipped further and stored longer. Many dairies, especially in cities, fed their cattle low quality feed and kept them in filthy conditions, so the resulting milk was full of dangerous bacteria. Pasteurization was used to control highly contagious bacterial diseases including bovine tuberculosis, E. coli, and brucellosis. 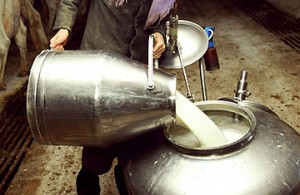 Today, however, farm sanitation is greatly improved and effective tests have been developed for bovine diseases. These methods are more than adequate to ensure the safety of milk. Still, pasteurization continues to be widely used to prevent infected milk from entering the food supply. Since pasteurization has been in use for so long, most people assume that raw milk is dangerous. The debate has been discussed here on Green-Mom.

A study by the Cornell University Food Science Department indicated that pathogenic microorganisms are present in between 0.87% and 12.6% of raw milk samples. Very young children, the elderly, those with weakened immune systems, and pregnant women may be particularly susceptible to infections originating in raw milk.

About 30 states allow the sale of raw milk in some form. Laws can vary greatly from state to state. Approximately three percent of the U.S. population (9 million people) consume raw dairy products like milk, cream, cheese, and yogurt.

Although the Centers for Disease Control (CDC), the Food and Drug Administration (FDA) and other regulatory agencies say that pathogens from raw milk make it unsafe to consume, more and more organizations now assert that raw milk can be produced hygienically and that pasteurization destroys its health benefits. While pasteurization may kill dangerous bacteria, it also kills good bacteria that help digestion.

Raw milk cheeses are considered to be the gold standard for high quality dairy products. The bacteria found in raw milk are essential to developing the flavors of most fine cheeses. French Roquefort is required by European law to be made with raw sheep’s milk. French haute cuisine traditionalists view pasteurized cheese as a sacrilege. Most traditional French cheeses have been made solely from raw milk for hundreds of years. One reason raw cheese makers age their cheeses is to get rid of dangerous microbes. Most raw milk cheese sold in the U.S. is aged for a minimum of 60 days.

Some small U.S. dairies are now beginning to adopt low-temperature vat pasteurization. Advocates note that it produces a product similar in composition to raw milk and is not homogenized.

Raw milk can sometimes be distributed through a “cow share” program, in which you own a share of a dairy animal or a whole herd, not unlike community-supported agriculture. This is a good loophole, as you can be considered a consumer of milk from your own animal.

Dairy farmers also benefit by the direct marketing of their products. Eliminating the middleman and selling directly to the public allows for greater profitability and sustainability. Many manufacturers now sell small scale pasteurization equipment for micro dairies, allowing local farmers to bypass the big milk processors and sell pasteurized milk directly to the consumer.

Ready to try raw milk? It tastes just like … milk. In California, sales of raw milk are legal, but containers must bear a warning label. California dairy Organic 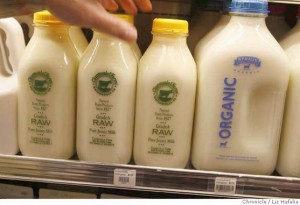 Pastures has a store locator on their front page.Whole Foods carries raw milk products from two world-class dairies, AtlantaFresh Artisan Creamery and Rogue Creamery. Your local natural foods market or even farmer’s market probably carries it. Already a convert and want to spread to word? Help advocate the benefits of raw milk and fight for legalization atRawMilk.org.

Merry Christmas and a Happy Holiday from Green Mom family and staff!