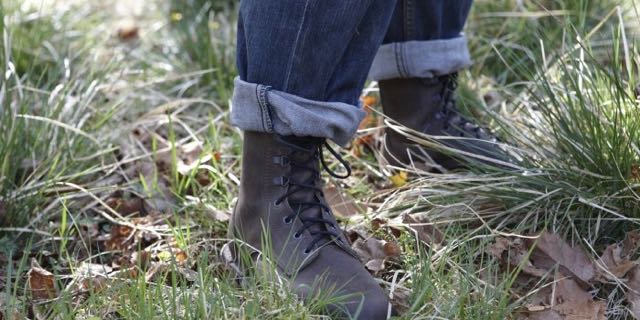 I have a friend who is hard-core vegan. This goes further than just diet, though; he wants his clothing to be free of animal products, too. Do you know how hard it is to find belts and shoes that aren’t made with leather? Especially if you have to wear traditional office attire for your job, finding decent-looking vegan options can be a real challenge.

This was in the 1990s, when leather alternatives were limited to “pleather” and other ugly vinyl materials. And they weren’t available in regular shops, either. He had to order his shoes from overseas, practically negating his vegan choice with a huge carbon footprint from shipping them halfway across the planet. Luckily, today there are many innovations in materials technology that can provide us with a wide variety of fabrics, colors, and textures. And there are many more online shopping options now on the Internet, too. 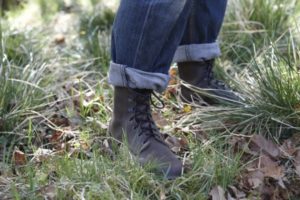 The UK’s Green Shoes offers “ethical leather” and vegan footwear choices. Fashion designer and lifelong vegetarian Stella McCartney is dedicated to producing clothing and accessories without fur or leather. People for the Ethical Treatment of Animals (PETA) has an online catalog. 100 percent of the profits from merchandise sales goes toward their mission of protecting the rights of animals. For a more comprehensive list of eco-friendly fashion retailers, check out this Green Mom article. 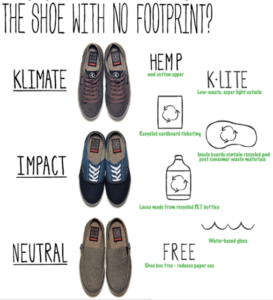 In the near future, we may be able to capture carbon dioxide emissions and recycle them into usable products. In a collaboration between NRG Energy and product management firm 10xBeta, prototype sneakers were made mostly from recycled carbon dioxide. Or, as NRG likes to put it, these are shoes without a footprint ― without a carbon footprint, that is.

The companies captured carbon dioxide emitted by power plants and turned it into a special polymer which made up approximately 75 percent of the final product. The remainder of the sneakers’ materials were not composed of recycled CO2, but “emissions released during their production could be captured via the same processes that collect the carbon dioxide used to make the shoe,” according to Business Insider.

Unfortunately, at this time the zero-carbon sneaker is not available for sale. Only five pairs were created to promote NRG’s sponsorship of the Carbon XPrize, a competition aimed at designing innovative technologies that could turn carbon dioxide emissions into useful products.

“These shoes are a prototype, symbolizing what could be possible in the future,” said Gin Kinney, vice president of NRG Business Solutions. “The important thing was for us to produce a product that was tangible, relatable, and manufactured in-mass to illustrate the opportunity that this XPrize represents.”

The good news is that mass-produced zero-carbon shoes may become a reality sooner than later, according to Marcel Botha, CEO of 10xBeta. He says the technology is scalable, and “can become commercially available once the processes are further developed for mass production.”

Recently, scientists, environmentalists, and manufacturers alike have been increasingly interested in carbon recapture technologies and their potential applications. The possibilities are promising: companies are already transforming carbon dioxide into fuel, and researchers are developing ways to turn the greenhouse gas into stone and concrete.

While this technology is encouraging, it’s not going to significantly mitigate the future impacts of climate change anytime soon. Carbon dioxide capture and recycling is still in its infancy. A 2011 report by the American Physical Society concluded that carbon capture “is not currently an economically viable approach” to solving the climate change crisis.

Regardless, Botha says he has hopes that the technology behind the zero-carbon shoe and similar innovations could help humanity prepare for the environmental challenges ahead. “I’m an optimist,” he says, “and I do think that science will help us reverse the negative impact that we as a species have had on the planet.” 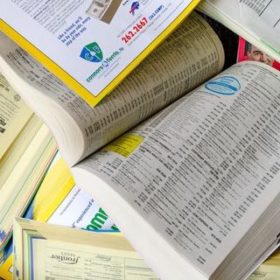 Eco friendly and Ethical Fashion For This Winter 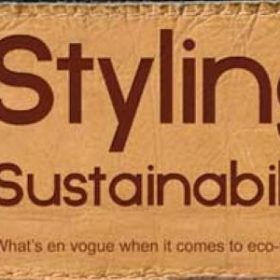