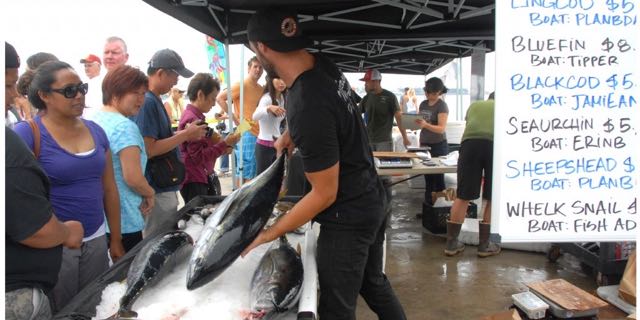 We’re all familiar by now with the concept of farmers’ markets: growers and food producers sell their wares directly to the consumer, cutting out the middleman. Consumers can personally meet the people who produced their locally-grown food, ensure its quality and freshness, and eliminate wasteful packaging, all in a community-oriented outdoor setting. Fresh, locally caught fish can be found at some high end farmers’ markets, but that fish is being sold by a middleman, someone who wasn’t personally on the boat catching the fish, but instead is selling discards from wholesalers.

San Diego has opened California’s first (of soon to be many) “fishermen’s markets.” Called the Tuna

Harbor Dockside Market, it works under the same concept as a farmers’ market, where growers sell directly to consumers, only in this case fishing boats dock at a certain pier once a week, and along the length of the pier are covered stalls with ice-packed displays and water-filled aquariums. The public can buy the freshest possible fish right off the boat, directly from the person who caught it.

There were initially no laws in place to set up this sort of operation, so new legislation had to be written. Other famous fishermen’s markets — in San Francisco or Pike Place in Seattle — are connected to restaurants with all of their sanitary standards in place. Enter county supervisor Greg Cox, who worked with market vendors, government agencies, and California Assembly speaker Toni Atkins to craft new legislation, using Tuna Harbor as a testing ground. The result was Assembly Bill 226, aka the “Pacific to Plate” law, which took effect statewide on January 1st, 2016. 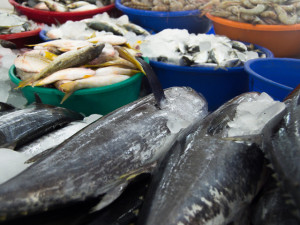 The dockside market is environmentally sustainable, too, catching a diverse variety of fish. The boat owners communicate and cooperate to avoid overfishing any one species and to avoid targeting only the highest priced species for wholesalers. “The guys that are here regularly are starting to talk to one another,” says Pete Halmay, a 74-year-old sea urchin diver. “One will say, ‘I’m going out for black cod,’ and then another will say, ‘Then I’ll go after rockfish.’ They’re figuring out how to bring in different fish so they’ll sell it all, and adding more variety to the market. It’s not only cooperation in broadening our target species, it’s finding those that we otherwise wouldn’t even catch. We’re not going to bring in 100 tons of anything because we’re going to bring in what locals can buy, which naturally means you’re harvesting less.”

Theresa Talley, a coastal specialist at the Scripps Institution of Oceanography, adds, “We’re trying to encourage consumers to be more adventurous — stray away from your salmon, go down to the docks and try something new. Broaden your choices. Go home with a whole fish, try a new recipe. The underlying philosophy is that each of us, in our role along the supply chain, has the power to contribute to a sustainable seafood system. That includes increasing the persistence of natural resources and the livelihoods of those that bring us seafood, and the availability of fair and healthy food for everyone.”

By cutting out the middleman, fishermen are able to make a better profit selling directly to local consumers instead of wholesalers, or shipping their catch overseas. They learn the demands of the local marketplace, further refining and broadening what they catch. The economic benefits serve to attract a wider variety of fishermen to the market. Soon there will be other fishermen’s markets cropping up all along California’s Pacific coast. In San Diego County alone, serious interest is forming for other fishermen’s markets in Mission Bay and Oceanside.

At the Tuna Harbor Dockside Market, located at the north end of Seaport Village, one can find whole and filleted tuna, rockfish, cod, swordfish, mackerel and more in bins of ice. Because many people won’t buy a whole fish, not knowing what to do with it, there’s a filleting station there, so customers can buy a whole fish and have it transformed into recognizable cuts. Halmay always has sea urchins and a tank full of live crabs. Another stall sells cans of locally caught tuna. The market is open every Saturday between 8:00 a.m. and 1:00 p.m. 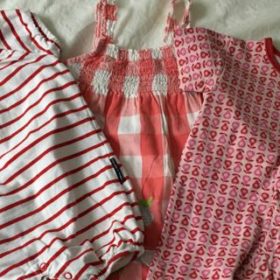 Organic Baby Clothes — Why it Matters and How To Afford Them 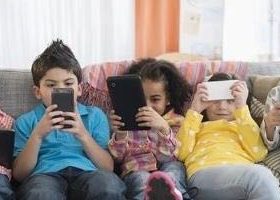